Porridge - how different can it be?

Home InterestingPorridge - how different can it be?

Porridge - a food that is definitely enjoyed by everyone. Porridge was my childhood morning food. I will not say that it went very close to my heart. When it was bigger, it didn't taste good, at least I thought so. I just had to make the porridge so that it goes to my heart.

At the moment, I don't eat porridge every day. However, I try to eat at least once a week. I have both salty and sweet porridge in my heart.

Quick-cooking oatmeal porridge with bananas and Greek yogurt is quite enough for me to enjoy it now. Porridge, fried with onions and bacon, is another way I like to eat it.

The food that has never let me down in my life is porridge, especially with milk and maple syrup.

Is there porridge on your menu?

Porridge is a dish that is usually eaten for breakfast. It is made by heating or boiling starchy plants, usually grains, in milk. It is often cooked with things like sugar, honey, (dried) fruit or syrup. Or it can be mixed with spices, meat or vegetables to prepare a spicy dish. It is usually served in a hot bowl, depending on its consistency.

Oatmeal or oatmeal is one of the most common types of porridge.

October 10 is International Porridge Day. The event is being organized to raise funds for the Mary's Meals charity in Anguilla, Scotland, to help starving children in developing countries. The aim of Porridge Day is to help and promote porridge as a modern dish and to create new porridge eating traditions.

According to the Merriam-Webster dictionary, the word "porridge" was used only in the 17th century, but it is believed that porridge-like dishes were prepared in Neolithic times by boiling in the ground, chopping or crushing cereals in water, milk.

Porridge was first produced by hunter-gatherers in southern Italy during the Paleolithic, but during the Neolithic it became commonplace.

The food has traditionally been closely associated with Scotland, possibly because oats can be successfully grown in highland border soils. In 1775, Dr. Samuel Johnson wrote that oats are "grains usually given to horses in England but to the people in Scotland."

Oats were introduced to Scotland around 600 BC, but traces of barley porridge have been found in pots dug in the Outer Hebrides and dating back 2500 years.

In the past, parts of Northern European and Russian porridge were the main course. It was often made from barley, although other grains and yellow peas could be used depending on local conditions.

Porridge was mainly a salty dish, with meat, root vegetables, vegetables and herbs. The porridge was boiled in a large metal pot over hot coals.

While fermented bread and ovens had not become commonplace in Europe, porridge was a typical dish to serve uz table.

Porridge and its types

In Latvia, records of porridge eating and cooking traditions in the 20th – 40th centuries. years.

Barley - in the territory of Latvia is the oldest and most widespread cereal culture, oats were also used, especially in Latgale. Barley groats in Kurzeme were called sour porridge, in Vidzeme - as acidity or cultivar.

The newest cereal culture in Latvia is buckwheat, which appeared at the end of the 19th century.

When the potato came to Latvia, it threw the mess out of the throne, becoming the leader of the farmer on the menu.

Porridge elsewhere in the world

In Scotland. Oatmeal is a Scottish national dish and an integral part of their daily menu. Every year, the Scottish village of Carrbridge hosts a world championship in porridge making. There, a champion is found out who knows how to make the most delicious and interesting porridge.

In Asia. Congee is a spicy rice porridge. Very often porridge r breakfast dish, but it can also be served as a main meal with the addition of protein and vegetables.

ASV. Corn porridge, popular in the southern United States, where it is eaten for breakfast or with salty dishes.

China and the Philippines. Boil fresh water, rice (raw or leftover) in ginger and boneless chicken broth until they break down into porridge. Filipinos usually eat at lunch as a "merienda" snack or as a full meal. Delicious food should be supplemented with fried garlic slices, thinly sliced ​​green onions and a splash of tropical calamansi lime juice.

Russia, Poland and various Eastern European countries. In these countries, porridge is called "Kashu". I prefer to cook whole grain buckwheat or buckwheat groats in water or milk.

Italy. In the Italian countryside, it is 'polentina', also known as corn porridge or polenta soup. 18th-century Italian farmers working in the fields often ate this and other simple dishes, along with fruits such as orange.

Slovenia and Croatia. "Žganci" is a Slovenian and Croatian dish made from corn, wheat or buckwheat flour, water, frying oil and salt. When eaten for breakfast, it is served with milk, honey, yogurt. It is also served as a main course, along with meat.

Denmark. Rugmelsgrød is a rustic dish made from rye flour or rye flakes and water. It is often served as part of a traditional dinner, but in Kari Schenning Dale's book "The All-Nordic Cookbook" it is served with a light golden syrup or lingonberry jam and a cloud of whipped cream - it sounds like a porridge dessert.

In Ethiopia. Genfo is a thick, mixed legume and grain porridge made with any of the following products: millet, sorghum, corn, chickpeas, oats, wheat, barley, soybeans. This porridge is usually served for breakfast with a healthy spoon of kibe (with butter) or yogurt, these are traditional Sundays for breakfast

More recipes in the section - Recipes! 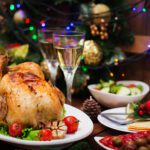 Martin's Day - What to cook in it?

Halloween - what to cook in it? 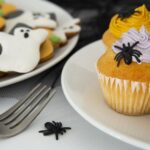